You might still remember my previous post entitled “Joaquin Sorolla. Spain’s Master of Light.” published here, which gave me the idea to paint Sorolla’s “Walk on the Beach” for our home – so, here it is!

The painting “Walk on the Beach” (1909) features Sorolla’s wife Clotilde and his eldest daughter Maria as the painting models at Playa de El Cabanyal beach in Valencia. Clotilde is wearing a straw hat decorated with flowers and holds a white open umbrella in her left hand. Her face is hidden by a curtain, and partially by the shadow of the hat. Maria holds her straw hat in her right hand. They are both wearing long white Summer dresses and they look very elegant in the gentle sea breeze.

The size of the original painting is 200 x 205 cm, but I chose a slightly smaller canvas for my painting, 120 x 150 cm, thus fitting an empty wall in our lobby. By introducing  different proportions between the size of the original painting and the size of my canvas, I actually had to decide on how to crop the painting without losing the crucial elements. Therefore, I decided to add more sea in the background, and to cut off about 20 cm of the sandy beach area. Here is my sketch on canvas…

It was a nice reunion with my box of oil paints, last time used in 2012. Luckily some paints were still in working condition, while others had hardened in the meantime. I started adding the background, Cobalt Blue Hue mixed with Phthalo Blue which are both commonly used to paint skies and water. For the sandy area of the painting I used Burn Sienna, extra fine oil paint by Sennelier. Click on photos below to enlarge. 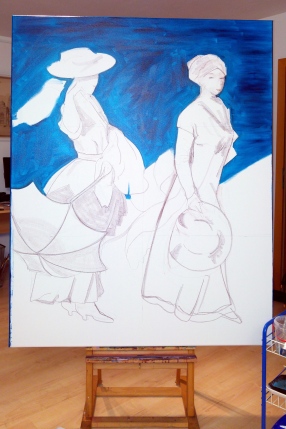 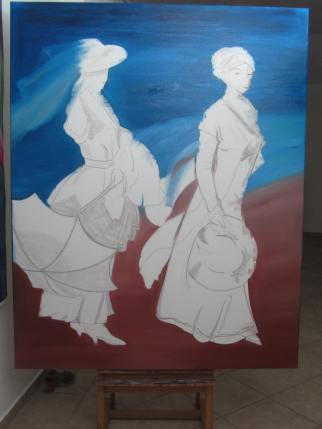 As it was the time of the European Football Championship UEFA EURO 2016, and the painting studio is the only room in the house with a  SatelliteTV connection, my boys moved into the studio and I had to go out into the lobby. No, I do not complain! It was cozy and light enough, so I continued painting in the lobby. 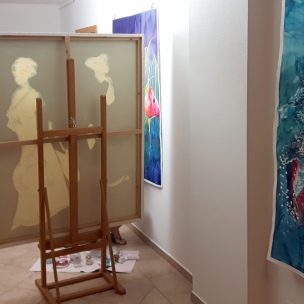 After the closing of UEFA 2016, I finally came back to the studio. The painting was already close to the final phase, and I was adding small details and painted the edges of the canvas (click on  photos below, to enlarge) . 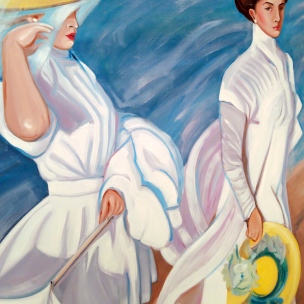 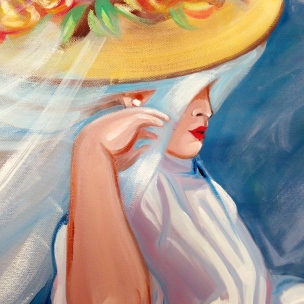 Here comes the final view on the completed painting. Currently it is in its drying phase, before we will place it on the wall, just opposite of our entrance door.

One thought on “Painting Steps: “Walk on the Beach” by J. Sorolla”